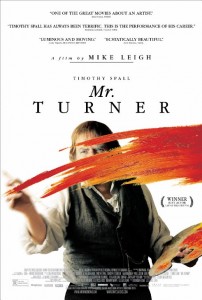 The preeminent Mike Leigh (Happy-Go-Lucky, Life Is Sweet) directs Timothy Spall (Harry Potter 3-7, The King’s Speech) as the famous (and my favorite) British Romantic painter JMW Turner. Come to see Spall give the performance of a lifetime, of course, but this biopic also reunites other actors from previous films by Leigh, including Dorothy Atkinson, Marion Bailey, and Paul Jesson.

The film covers the last 25 years of Turner’s life, from the death of his father to his own death in Chelsea. Throughout these years, his acclaim grows non-stop even as he becomes a more radical and reviled figure by the art institutions that taught him. What truly brings the film to life, though, is the humanness we see in one of Britain’s most revered artists: we see not only his popular side but the hurt and angry side of him that struggled to move past the loss of his dad and an abusive relationship with his housekeeper.

After getting a lot of buzz at the festival circuit, the film came out in the UK on October 31 to rave reviews, with many calling this Mike Leigh’s masterpiece (and seriously, that’s saying something – the guy has not made one bad movie). The production value looks top-notch, with his Victorian world beautifully brought to life not only in parlors and pubs but in stunning views of the English landscape that will make you want to pick up a paintbrush and go paint, too! Yet another film receiving serious Oscar buzz, especially for Spall’s performance, you won’t want to miss this movie.

It’s easy to find info on JMW Turner, but a good place to start is the Tate Modern’s bio on him.