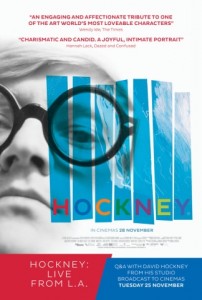 David Hockney is an artist who, though he’s getting older, only seems to grow into a bigger star with each year. The documentary will cover most of his life as well as his impact on the art world. The film is directed by Randall Wright, an acclaimed documentarian who has done another film on Hockney before, as well.

Already considered one of the UK’s most accomplished portraitists and one of the most important artists of his generation, this documentary allows audiences to peer into his personal archive of photos and videos for the first time ever. In addition, a preview screening followed by a live talk by Hockney will be broadcast into theaters around the globe from Los Angeles on November 25.

Undoubtedly. Hockney is a treasure, entertaining and lively and funny to boot. The film will hopefully reveal sides to the artist never before seen, and if the preview’s something to go by, we will certainly see a lot of his home videos and old photos.

The catch for American audiences, of course, is how to see it. The film currently only seems to have distribution in the UK, so searches online might be necessary. While you’re waiting, be sure to check out other films about Hockney: David Hockney’s Secret Knowledge, a BBC documentary Wright put together; Waiting for Hockney, a documentary about a struggling artist who dreams of meeting the man who inspires him; as well as most recently, Tim’s Vermeer, which features Hockney as a consultant to Tim Jenison, a man re-creating the photorealism in Renaissance art. For a throwback, look at 1974’s acclaimed A Bigger Splash, an intimate semi-documentary about the disintegration of Hockney’s relationship with his lover.

To find out more about Hockney, check out his website.