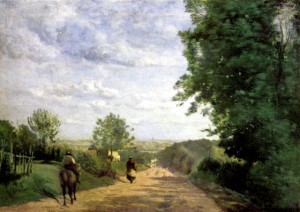 I admit that if an artist is not in the Art Docent Program, I know nothing about them!  So I when I visited Westmont College’s campus recently, I was eager to visit the Corot exhibit at their art museum.  Glad I did; Jean-Baptiste Camille Corot is my new favorite artist!  I enjoyed viewing his tranquil outdoor scenes which often featured peasants or nymphs. He is known as a French Realist and often credited as a precursor of Impressionism.  A diligent worker, this master created 3,000 paintings as well as many etchings.  While he often painted in the open air, he was essentially a studio painter.

Born in Paris in 1796 Corot was a landscape painter who had an immense influence on 19th century landscape painting.  He was known for favoring mood and atmosphere over topographical detail in his paintings which were popular among his contemporaries.  He encouraged younger artists to copy his pictures, which he then signed, either as a learning exercise or for producing works for sale.  This practice resulted in numerous forgeries and imitations, as well as difficulties in attribution.

I found this on Wikipedia: “In later life, Corot’s studio was filled with students, models, friends, collectors, and dealers who came and went under the tolerant eye of the master, causing him to quip, ‘Why is it that there are ten of you around me, and not one of you thinks to relight my pipe?’[44] Dealers snapped up his works and his prices were often above 4,000 francs per painting.[38] With his success secured, Corot gave generously of his money and time. He became an elder of the artists’ community and would use his influence to gain commissions for other artists.”

His contributions to figure painting are important; Degas preferred his figures to his landscapes, and the classical figures of Picasso pay overt homage to Corot’s influence. And considering that Claude Monet once exclaimed:  “There is only one master here—Corot. We are nothing compared to him, nothing” I am really glad I can say I am familiar with this master!