This Memorial Day weekend, we would like to introduce you to a new bi-monthly series, Artist Spotlight, in which we share some lesser-known works by famous artists in the Art Docent Program.

Memorial Day: a day of reflection, thanksgiving, and (of course) barbecues. Oh, and if you’re so inclined, it can be a day of painting as well! In honor of those who have fallen in service of our country, we would like to share some of our favorite artworks honoring them.

Considered a quintessential American artist, Norman Rockwell got his claim to fame creating covers for The Saturday Evening Post, Boy Scout calendars, and Look magazine. Known for his sentimental and warm depiction of classic Americana, seen in paintings like The Clubhouse Examination (left), The Four Freedoms and Home at Last, he created over 4000 works in his lifetime. Despite this, he still said, “I’ll never have enough time to paint all the pictures I’d like to.” Though his paintings were criticized as overly romanticized, they are without a doubt some of the most popular pieces of American art and remain popular today. He once said of his favorite painting subject:

“The commonplaces of America are to me the richest subjects in art. Boys battling flies on vacant lots; little girls playing jacks on the front steps; old men plodding home at twilight―all these things arouse feeling in me.”

To see some of his other classic wartime paintings, check out the archives of the Saturday Evening Post here. His work is also featured in the ADP lessons “Stories” for Kindergarten and “Action & Adventure” for fifth grade. 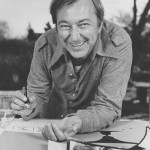 Next on our list is Jasper Johns, one of the major modern American artists, whose work, Three Flags, is featured in the sixth grade lesson, “Later Twentieth Century Art.”

What we love most about this painting is its ambiguity. Johns believed in using “things the mind already knows” as subjects in his work, as a reaction to Abstract Expressionism, which featured no recognizable subjects. However, the American flag, as recognizable as it is, can hold many different meanings and symbols. Furthermore, since Johns painted with hot wax, the smallest flag on this artwork sticks out five inches from the canvas! Johns thus invites his audience to ask, “What is a painting? What does the American flag mean here? What is its purpose as a symbol and an object?” In fact, he encouraged strong audience reaction, claiming that:

“I have no ideas about what the paintings imply about the world. I don’t think that’s a painter’s business. He just paints paintings without a conscious reason.”

More information on this piece can be found here, as well as within the Art Docent Program. 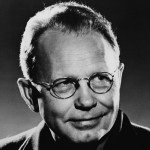 This painting by Grant Wood is just plain fun. Best known for his classic, American Gothic, Grant Wood was not known for satire. However, this one has a great story behind it: commissioned by the Cedar Rapids chapter of the Daughters of the American Revolution to create a stained glass window for the new veterans’ memorial, he chose to import high-quality German glass. The Daughters, however, were upset that he had used a non-American source and refused to install the window. As retaliation, Wood cross-dressed three Founding Fathers and put them in front of the painting, Washington Crossing the Delaware.

Focusing primarily on painting the rural American Midwest in the Regionalism movement, he truly loved his home, saying once:

“In making these paintings, as you may have guessed, I had in mind something which I hope to convey to a fairly wide audience in America — the picture of a country rich in the arts of peace; a homely lovable nation, infinitely worth any sacrifice necessary to its preservation.”

We hope you enjoyed our short tour of great American paintings! How did you celebrate Memorial Day this weekend? Who are some of your favorite American artists? Let us know in the comments.

See you again in two weeks for Artist Spotlight. Until then, check our blog every Tuesday and Thursday for new posts.