The first of a weekly series of three major art scandals. Be back here on Thursday to read part 2!

The Battleground: The Final Judgment, Michelangelo 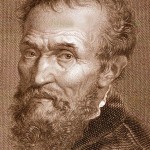 Michelangelo: One of the most influential figures in Western art, Michelangelo is perhaps best known for painting the ceiling of the Sistine Chapel and carving two of the most famous marble statues out there, David and Pieta. Though he never expanded beyond the classical arts, unlike his contemporary, Leonardo da Vinci, his prowess in art has earned him a rightful place in the annals of art history.

The Council of Trent: Ushering in the start of the Counter-Reformation, a conservative revival of Catholic traditions fueled by the need to respond to the Protestant Reformation, the Council of Trent stands as one of the most important ecumenical conventions of the Roman Catholic Church. Affirming and clarifying doctrines on everything from Scripture’s canonicity to the sacraments, the Council re-established the dominance of the Church over everyday life.

After completing the quintessential Renaissance work on the Ceiling of the Sistine Chapel, Michelangelo received yet another commission from the Catholic Church to paint a depiction of the final judgment on the altar wall in the Chapel. Michelangelo created a monumentally detailed and grounbreaking depiction in The Last Judgment, as those saved by God ascend to heaven on the left of the fresco and those condemned to hell descend to the depths on the right.

Given that this massive fresco was on the wall of probably the most famous chapel in the Roman Catholic world, and possibly even the whole world, the Council of Trent decided the nudity of the 400-plus grotesque and awkwardly positioned humans and demons was too obscene. Though Michelangelo used the nudity to show the equality and candidness of all the people in the scene, the Pope’s personal master of ceremonies, Biagio da Cesena, declared:

“It was a very disgraceful thing to have made in so honorable a place all those nude figures showing their nakedness so shamelessly, and that it was a work not for the chapel of a Pope, but for a brothel or tavern.”

After Michelangelo’s death, at the urging of the Council of Trent, the painting’s nudes were covered up.

It seems like Michelangelo got the last laugh here: a restoration in the 1980s removed half of the censorship in the painting.

Furthermore, it seems that even Pope Paul III, who commissioned the painting, enjoyed some of Michelangelo’s cavalier attitude. In response to Cesena’s criticisms, Michelangelo added the pagan god of the underworld, Minos, with donkey (ass) ears and all — and gave him Cesena’s face. Even worse, Michelangelo covered Cesena’s genitalia — with a snake biting his sensitive parts! When Cesena complained to the Pope, the Pope replied, “I”m sorry, but my jurisdiction does not extend to Hell,” and the portrait remained.

Michelangelo was not the only artist in history who courted controversy by depicting nudes. Read up on Manet’s Luncheon on the Grass, Sargent’s Portrait of Madame X, and Picasso’s Brothel of Avignon for more bare-skinned scandals.

It may be easy to say today that the nudity in The Last Judgment is not provocative or controversial in the slightest, but back then, it certainly was a scandal. What do you think? Have you ever seen an artwork (of any sort! Paintings, statues, movies, TV, or books) that you feel was scandalous or inappropriate? Let us know in the comments!