Last summer, we ran a post featuring a few art-historical dogs during the “dog days of summer.” That post, and the fact that we started this year with a blog post about a cat’s art-historical hijinks, mean that it’s high time we showed cats some more love–and medieval cats, specifically.

Art in medieval western Europe wasn’t on a canvas–it’s found in the parchment pages of illuminated manuscripts. Interestingly, illuminations featuring cats are quite common during the Middle Ages. Why? Cats were common pets for monks who wrote and illuminated a good deal of the manuscripts in medieval Europe. And it seems that cats were just as popular in the Middle Ages as they are on the internet today. Inspired by The British Library’s article on medieval Lolcats, we put together our own list of funny medieval cats perfect for the digital age.

Anyone who’s encountered a cat knows that they think of themselves as the ruler of their domain. This unfortunate royal kitty, though, is being besieged by its mortal enemies; an army of mice!

The owner of this manuscript (the same manuscript where the image from #1 is found) must have really loved cats. This sketch features a musical cat playing a rebec, which looks to be related to a violin or fiddle. And they say the internet invented funny cat pictures. 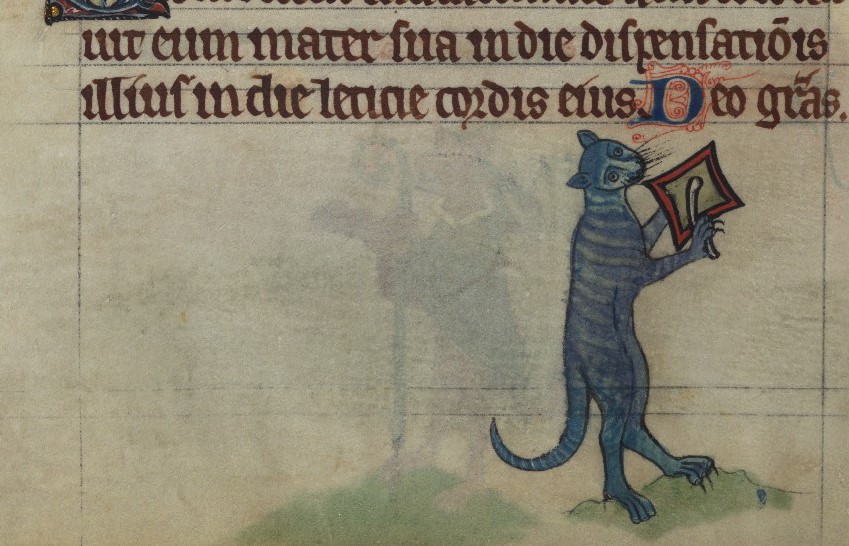 Apparently cats like cymbals, too…? Guess Disney’s Aristocats wasn’t too far off the mark.

This cute lil cat is also clever, and uses what looks like a tree trunk to separate itself from a barking dog. Perhaps the illuminator was more of a cat person than a dog person.

5. Cat Catching a Mouse, Being Caught by a Dog

Just call it catch-ception. Also, this cat looks like a mini-leopard…yet still looks more catlike than the nightmare-inducing CGI we saw in the new Cats trailer.

6. Naughty Cat Being Weighed by Its Master

Okay, this cat isn’t strictly medieval, but dates from a collection of poems written by hand and compiled in 1663. (Which means it’s still a manuscript cat.) We had to include it because of what’s going on in the picture: this bad kitty ate all the meat its master bought for his guests…and is being weighed to prove it.

Some things don’t change over time.

What do we do here at the Art Docent Program? Discover more about us and our curriculum here!